The color filter used in the field of displays is a surface of a transparent plate such as glass, and a wiring pattern is formed by vertically and horizontally arranging two or more fine pixels of different hue. One pixel varies in size from tens of micrometers to several hundred micrometers, and each hue is constructed in a certain order and arrangement. For this reason, there are various methods for manufacturing a color filter, and a common method is to uniformly disperse colorants such as dyes and pigments in a colored resist in a transparent photosensitive resin, apply the coating, and expose and develop. The prescribed shape forms a dyeing pattern, which is a pigment dispersion method that can achieve mass production. However, in terms of large-formatization and coating of raw materials, it needs further improvement.

In view of the above problems, the display field has begun to pay attention to adapting to large-scale screen production and printing technologies. At the same time, screen printing has also been requested to be more refined. Screen printing has long been applied in the fields of commercial advertising such as large-format posters and electronic components such as printed circuit boards. It is a printing method that does not rely on the characteristics of substrates and saves materials.

Therefore, this study is mainly to improve the original screen structure and ink composition, optimize the relevant materials, and then discuss the new high-definition screen printing method (HADOP method). A 40Î¼m sharp line print that attenuates the image edge and has a very high linearity, thus promoting the application of color filter production.
Experimental materials and methods 1. Synthesis of transparent resist materials for platemaking and inks
The transparent resist was prepared by mixing a polymer, a monomer, and a photopolymerization initiator in a ratio of 6:4:3.

The photopolymerization initiators are TAZ-106 (5-triazabenzenes manufactured by Green Chemical Industries, Ltd.) and 2-hydroxy-2-dimethoxy-1-phenylpropane-1-one (manufactured by Chiba Gagyo Co., Ltd.). ) Mix in a 4:1 ratio and prepare an initiator solution using cyclohexanone as the solvent. Among them, commercially available special grade reagents were used as monomers, photopolymerization initiators, and various reagents including solvents, but the following compositions were used as the polymers.

The solvent used was 3-methoxy butyl acetic acid, and the various acrylic monomers of benzyl methacrylate (BzMA), styrene (St), and 2-methacrylic acid (MMA) were 1:1:1. After the mixture is mixed, the azobisisobutyronitrile (AIBN), which is a radical polymerization initiator, is further stirred at 80Â° C. for 6 hours to obtain a terpolymer after polymerization of the radicals. Further, in the MMA of the terpolymer, the original partial hydroxyl group was subjected to an addition reaction with glycidyl methacrylate (GMA) to synthesize a double bond-introduced quaternary copolymer (P-1).

Except for this, the MMA was changed to acrylic acid (AA), and similarly to P-1, an addition reaction of a part of hydroxyl groups with GMA was carried out to synthesize a double-bonded four-way copolymer (P-2). In order to compare plate-making characteristics, a commercially available polymer was also used, and a commercial propylene polymer ACA-200 (Disell UCB) was used as a commercial polymer.

2. Preparation of pigment dispersion resist ink
The pigment-dispersed resist ink had a ratio of pigment to clear resist of 1:4, the solvent was propylene glycol methyl ether acetate (PGMEA), and the pigment was CIRed 177, CI Green 36, CI Blue 15:3. The preparation method was as follows: 200 g of CI Red 177 pigment, 167 g of dispersant Disperbyk 161 (30% non-volatile content), and 633 g of PGMEA were mixed and dispersed for 24 hours using a granule stirrer. The transparent resist was added in a prescribed amount and uniformly stirred. After filtering with a filter with a pore size of 2 Î¼m, a red dispersion resist ink was obtained. In order to compare with the conventional screen printing method, an ordinary screen printing ink (EG-RED manufactured by Sun Ink Co., Ltd.) was used in the experiment.

3. Plate making and printing
Using a screen printing machine manufactured by Nuillon, the squeegee is made of urethane rubber, taking into account the relationship between mesh tension and printing pressure, and the mechanical strength and solvent resistance of the material. The printing material used was a PET film with a thickness of 185 Î¼m. In order to make the substrate and the ink adhere well, the surface of the substrate is roughened by a corona discharge treatment to increase the surface activity.

In terms of plate making, two kinds of screens were prepared for comparison experiments, namely Standard Screen and HADOP Screen. In the standard version, a transparent resist was applied to the surface of a stainless steel wire mesh (250 mesh, thickness: 53 Î¼m) by a slot coater, and the thickness of the plate was 7 Î¼m after being naturally dried. The printing plate uses a UV light source with a wavelength of 300-450 nm, and the irradiation energy is 50 mJ/cm2. The HADOP plate uses the ST590 CALH mesh yarn (special order, 590 meshes, 28 Î¼m mesh thickness, 13 Î¼m wire diameter).

The stretch net uses a square aluminum mesh frame (320mm x 320mm) and is stretched with a stretcher. The stretching tension is 2000-2300N/mm, the stretching angle is 34.1Â°, the screen is polished before stretching, and then a 5 Î¼m thick adhesive layer (cyclohexanone solution) is applied to the screen and dried. After that, as a backing buffer layer, a photosensitive resin D glue solution was coated and dried naturally. Then, on the printing surface, a photosensitive resin A glue solution was applied by a slot coating method to make a HADOP printing plate.

After applying a transparent resist on the screen, both sides are exposed as necessary. After the non-graphic portion was hardened, it was developed with a 0.1% KOH aqueous solution to form an image plate. Further, the screen plate was placed at 120Â° C. and heat-treated for 2 hours to improve its water resistance and solvent resistance. The mesh yarn may also be treated with a silane coupling agent in advance to improve the adhesion of the resist layer to the wire mesh, such as drying after leaching with a 0.1% aqueous solution of Î³-methylpropylpropyltrimethoxysilane for 30 minutes. .

4. Material performance evaluation
(1) Development Characteristics Test
In order to test the developability of the screen printing plate, a plate-making resist was coated on a stencil of a certain size to be photohardened, developed with a 0.1% KOH aqueous solution, and the remaining state on the stencil sheet was observed.

(2) Determination of Viscosity and Dynamic Viscoelasticity of Ink
The measurement temperature was 25Â°C and dynamic viscoelasticity was measured using a viscoelastic analyzer (double cone type, diameter 25 mm). The test angular velocity Ï‰ was in the range of 0.1 to 100 revolutions per second, and the tan Î´ (G"/G') was determined from the measured loss elastic modulus G" and the storage elastic modulus G' under conditions of a strain amount of 1% and 25C.

Although it includes reason for inference, it can be seen that the structure of the printing plate or mesh is the basic reason that affects the resolution of the screen. In order to achieve high-definition, Hadop's screen edition adopts a fine wiring structure for the mesh part of the printing plate, and decomposes the function of each pixel. That is, this kind of high-precision, high-tension mesh yarn ensures that With the required resolution, a 5 Î¼m opening is formed after the photosensitive layer is coated, and the ink is easily fixed and transferred on the screen. In addition, there is a backing buffer layer on the back of the HADOP screen, so that the net distance is accurate and certain, and the net distance for HADOP printing can be separated in time is 0.7mm, which is much smaller than the net screen printing distance. The function model of HADOP net edition is shown as in Fig. 3.

In traditional screen printing, the mesh of the printing plate is fixed on the four sides of the mesh frame. Above the mesh yarn, the ink is scraped and pressed by the squeegee to press the ink on the screen printing surface and then transferred to the substrate. In this transfer process, the mesh yarn is equivalent to a spring and affects the entire surface of the printing plate with a certain amplitude of motion. As a result, the spring (net yarn) not only moves up and down, but also includes a length and length, and has a large movement range. Therefore, it takes a long time to make the screen stable.

The high-definition HADOP screen uses a fine spring structure to divide the screen motion by a spring equivalent to 1 pixel. As a result, the amount of movement in the screen printing process becomes smaller and the duration becomes shorter. In addition, the pattern pixel has been miniaturized to 1 pixel at the beginning, which inevitably becomes the output of the high-definition pixel. More importantly, due to the refinement of the screen structure, it is the use of a 1 pixel 1 function distribution method, which can ease the impact of printing pressure on the screen.

We are a professional manufacturer of bags for 15 years.Our company mainly produces Flexible Intermediate Bulk Container, Jumbo Bags , Plastic Woven Bags, Valve Bags , Paper- Plastic Composite Bags and other products,Our products are widely used in Chemical Industry, such as Calcium carbonate, magnesium oxide, graphite powder, potassium chloride, bisphenol and other chemical powder product.If you have any question,please contact us.We will give you the best packing plan with the experienced and professional technology. 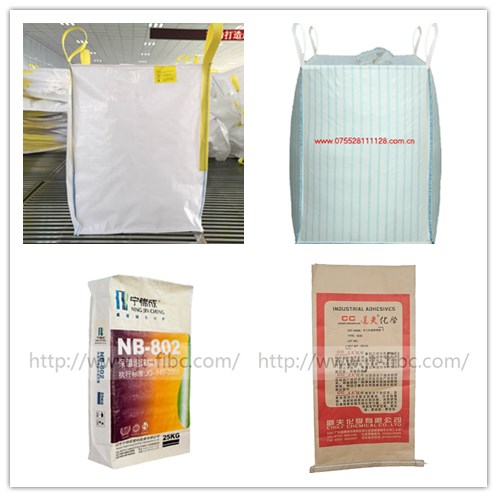