Recently, Academician Yang Xueming of Dalian Institute of Chemical Physics, Chinese Academy of Sciences was invited to write a review article entitled Surface Photochemistry Probed by Two-Photon Photoemission Spectroscopy for Energy & Environmental Science. This article briefly reviews the history of the application of two-photon photoelectron spectroscopy (2PPE) in surface photochemical kinetics studies, details the mechanism of photocatalytic dissociation of methanol on the surface of TiO2 revealed by this method, and looks forward to 2PPE and other surface sciences The application of technology combination in the future research of surface photocatalysis dynamics.

In recent years, Yang Xueming's research group has developed a time-resolved femtosecond two-photon photoelectron spectrometer, developed a method to study surface photochemistry and photocatalysis using real-time two-photon photoelectron spectroscopy, and took the lead in applying this method to the photocatalytic reaction of TiO2 surface. Mechanism exploration. The ROH / TiO2 system is closely related to energy and the environment. Yang Xueming and others have thoroughly studied the photochemical kinetics of water and simple alcohols on the surface of rutile TiO2 (110), and achieved a series of original results (published in Royal Chemistry Paper 1 in the Chemical Journal of Chemical Society, Paper 2). The photocatalytic dissociation of methanol on the surface of TiO2 (110) is the first study on the photochemical mechanism of methanol on the surface of TiO2 single crystal (Surf. Sci. Rep. 66, 185 (2011)). The title was reported (link), and was named Cutting Edge Chemistry in 2010 by Chemistry World.

Although two-photon photoelectron spectroscopy has only just begun to study surface photochemistry and photocatalysis, it has shown great potential in mechanism research. Combined with surface analysis techniques such as scanning tunneling microscope and programmed temperature desorption, it is helpful for us to clarify the active sites and products of surface reactions; combined with ultra-fast infrared lasers, we can study the effects of vibration excitation on surface reactions; Pumped by other ultrafast light sources, two-photon photoelectron spectroscopy can be used to study the time scale of surface reactions at a microscopic level. 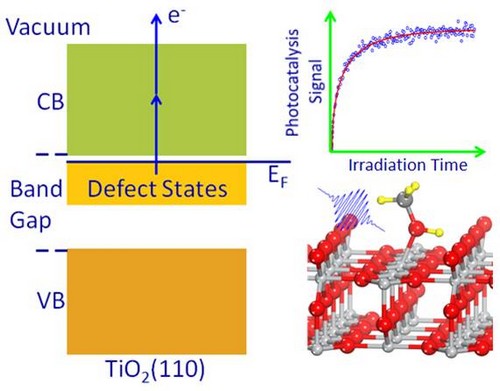